Sacha Jafri is “still a bit overwhelmed” after someone bought his last year’s work – a massive, laboriously made painting – for $ 78 million.

Guinness World Records considers the piece, titled The Journey of Humanity, to be the world’s largest canvas painting at 15.95.76 square feet – roughly the size of 10 tennis courts, says Jafri.

The artist split the painting into 70 individual pieces in order to sell it. But he says he was moved to learn that there was a buyer who was so inspired by the artwork that he decided to take the whole lot.

“He showed his love for the painting and he was proud of it. It meant so much to me,” Jafri told Carol Off, host of As It Happens.

The British artist was working in Dubai when the world stalled at the start of the coronavirus pandemic.

Jafri is on his record-breaking painting that he created in the Atlantis Palm Hotel in Dubai. (Giuseppe Cacace / AFP / Getty Images)

Thinking about connection and isolation, he decided to call on children around the world through ministries and schools to share their experiences through art with him. His painting is based on the stories he saw in their work.

“We got millions of pieces of art from children [in] Over 140 countries … from all walks of life … from orphans to refugees to the rich, “said Jafri. 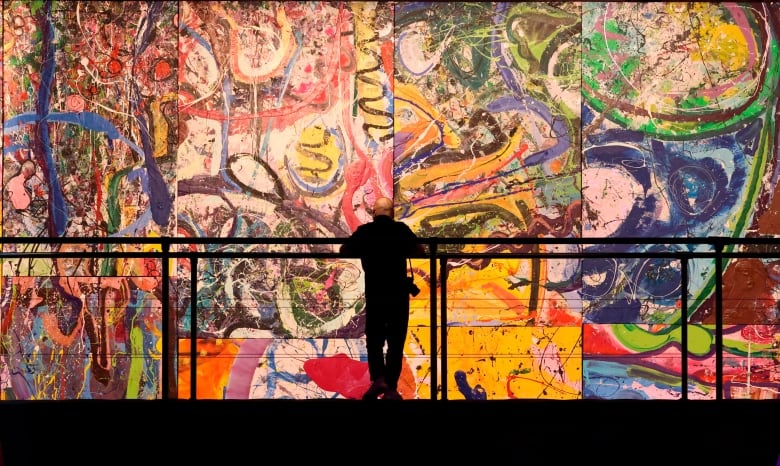 A visitor stares at fragments of The Journey of Mankind in Dubai on Feb.25. (Karim Sahib / AFP / Getty Images)

“I put a lot of your artwork in these huge circular portals that I created on the painting. So the idea was that you would have the journey of humanity – my painting – and this is the world as we know it. But I wanted to lead us to a better world through these circular portals, through the hearts, minds and souls of our children. “

The pictures the children sent Jafri were mostly about how the pandemic changed their lives, he said.

“They just revealed how they felt. It was just the truth. There was pain. There was fear. There was a sense of separation … frustration,” he said. “But then [there was] a lot of hope and love. “

For the next eight months, Jafri worked on the painting at the Atlantis Palm Hotel in Dubai, where his canvas could barely fit in the ballroom.

Upon completion, he planned to sell the work to fund health, sanitation, and education initiatives for children living in poverty.

“I believe our childhood is our greatest gift,” he said. “And unfortunately, the first thing we’re taught or encouraged to move on is … As adults, we should use all our strengths within ourselves to keep the child alive forever.” 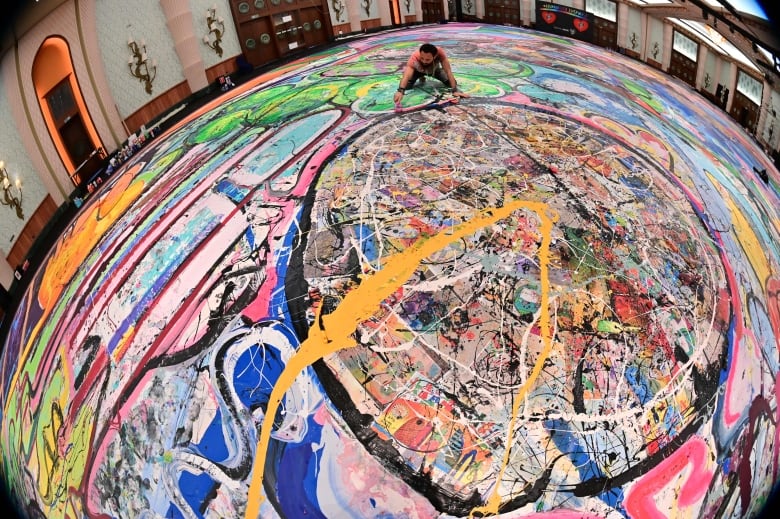 Jafri says he injured his back while working on his record-breaking painting. (Giuseppe Cacace / AFP / Getty Images)

He covered every inch of the painting on his own, but not without the influence of carrying all those cans of paint from one end of the canvas to the other and then stretching and bending enough for his brush to reach every point.

“I’ve done a lot of damage to my body,” he said. “I paint from a very deep, meditative state. So I’m in a trance. I don’t know what damage I’m doing.

“I actually had to have it [an] Emergency surgery on my back. Both of my vertebrae came out completely because the damping was gone. So they had to do emergency surgery and put a rod through my spine. My pelvis is out of line on both axes and my heels have just come off my feet. “ 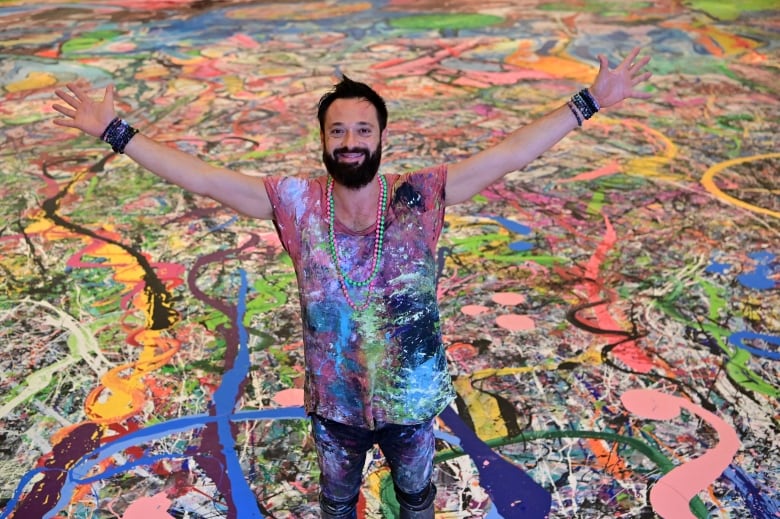 The gigantic painting is based on works of art by children all over the world. (Guiseppe Cacace / AFP / Getty Images)

But he kept walking and the people around him noticed. One of them ended up being buyer Andre Abdoune, a French national living in Dubai who runs a cryptocurrency business.

“This guy kept coming in and looking at it … [he] burst into tears, “said Jafri.” I could see that he had a very spiritual connection. “

Abdoune visited Jafri for five days in a row, several hours a day. He thought it would be a “travesty” to split the painting into 70 parts to raise money, Jafri said.

And then they ran out of things to talk about and Jafri said he would just let him stay there to look at the painting.

When the auction took place on Monday, Jafri wanted to sell his artwork in batches for $ 30 million to raise money for charities like UNICEF, UNESCO, Global Gift Foundation and Dubai Cares.

People from Miami, Mexico and LA as well as Switzerland, China, India and Russia called to bid on the pieces. There weren’t many Middle Eastern bids, but Jafri noticed a person at the auction house whom he recognized.

“This guy was in the room and I realized it was him. I think his first bid was $ 50 million. And I said, ‘Whoa, OK, that might be interesting … and it just went on and on . “

Jafri says he is grateful to the buyer who plans to build a museum for the work.

Written by Mehek Mazhar with files from Reuters. Interview producer of John McGill.