Stop painting. You’re welcome. Just stop. Or maybe not entirely. You might keep painting but mainly working on how the painting is over.

The mixed messages in a show on the death of painting, which consists mostly of paintings displayed in a room full of paintings, are not difficult to spot. The irony actually drips from the magnificent frescoed walls of Venice’s Ca ‘Corner della Regina, home of the Fondazione Prada.

Stop Painting, curated by the Swiss artist Peter Fischli, is an exhibition about the successive premature declarations of the death of painting in modern times and how each individual succeeded in killing the medium. It does not come from an artist who is a painter trying to justify his craft, but from one whose preoccupation with color is mostly about choosing colors to dip things in (like a coat hanger) or a lump of foam dab to resemble something else.

Fischli is best known for his partnership with David Weiss (deceased 2012), and his oeuvre is a kind of modern Dada, an ironic use or reproduction of readymades and found objects that are somehow made absurd by sequencing chains or jumps in scale. His best-known work is probably the endlessly demolished film “The Way Things Go” (1987), a cascade of events that takes place through a sequence of everyday objects, but his deceptively amateurish snapshots of airports are also brilliant, the infrastructure of stuff.

Here he takes an architectural stance on a classic Venetian palazzo designed by Jacopo Sansovino (architect of the buildings around St. Mark’s Square) and plays with the rich, fruity frescoes by putting paintings on boards and walls that open through doors from one room to another or on large tables that dominate even these most impressive rooms.

He deliberately dispensed with a chronology and instead identified five art-historical breaks that could have knocked painting off its pedestal. The first is the advent of photography in the mid-19th century and the questioning of the uniqueness of the art object. The second is the invention of the ready-made and the collage boom at the beginning of the 20th century, the end of the image as a representation of something real in the world.

Third is “The Death of the Author”, the title of a text by Roland Barthes published in 1968 that addresses the question of the authenticity of the artistic gesture. Fischli came into play at break four: Joseph Beuys urged his students to stop painting, and Jörg Immendorff’s scribble on canvas “Hört auf zumal”, the title’s “stop painting”. That is the key here, the reaction to the commodification of the work of art. Finally comes the fifth thing that Fischli calls “the crisis of criticism as such in so-called capitalist society”. It ends with Kurt Schwitters (also deeply involved in fractions two and four) painting banal still lifes “for my own pleasure”.

The exhibition begins with a model of the room itself, a rough and finished representation, a mise en abyme of the room in the room and miniature copies of the works of art in the model, which is itself a typical Fischli work of art. 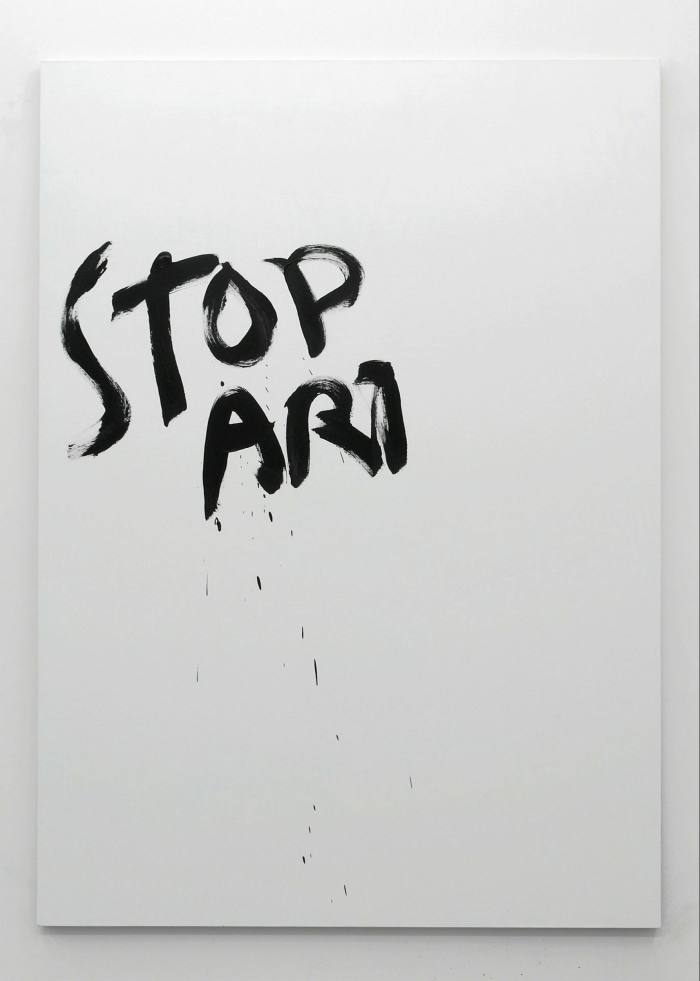 Merlin Carpenter, ‘The Opening: Intrinsic Value: 5’ (2009) © Courtesy of the artist and the Simon Lee Gallery

The art in the exhibition is amazing, ranging from Michelangelo Pistoletto’s paint-splattered coveralls in a display case to Jana Euler’s inflated painting of an outlet to dozens of works with scribbled text and little touches of pop to lighten it up. There is a film by Andy Warhol who amateurishly splashes red on a BMW with a brush, a hypertrophied splash of paint by Lynda Benglis, Lichtenstein, Richter, Rauschenberg and Ruscha.

Gene Beery’s poorly painted sign that reads, “Sorry, this painting is temporarily out of style. Closed for updates. Watch out for aesthetic reopening ”and its twin“ Watch this Canvas ”capture the mood pretty well. John Baldessari, Karen Kilimnik, Merlin Carpenter and Henry Flynt contribute words on canvas, more provocative performances are captured with Gustav Metzger’s “Auto-destructive art” and Adrian Piper’s “Catalysis III”, for which she walked sticky through New York with a white emulsion, her shirt is painted with the words “WET PAINT”.

With Piper, the body begins to replace the painting, the aura of the object is replaced by the authenticity of the self. If you go back to Fischli’s model, you notice that it is populated with cut-out figures. Often they see the wrong thing, a door, a window, the spaces between the images. At this point, you may realize that, given all these declarations of the end of painting and the death of art, the exhibition itself has replaced the object. We are the enigmatic, rather empty figures in the model, and they are just as much a part of Fischli’s work as the paintings. We have made ourselves complicit in the commodification of art and are now ourselves commodified, objectified, made into art.

So many of the works in the exhibition show the “thinginess” of art, its commercial materials, the declining appreciation of painting, the self-confidence of artists about the lack of control they will have when a work leaves their studio, the clumsy white ones Walls amid the frescoes. As the model reveals, the show is only a show if there are characters to see it. The end of painting is only there when we look at the pictures that tell us that it is so. And that’s far from the end.

At Peabody Essex, the sun sets on old ideas about maritime painting