A historic house in Muncie has been converted into an exact replica of the area where Ross shot many episodes of The Joy of Painting.

MUNCIE, Ind. – A new exhibition in Muncie connects visitors with a man who taught us that “happy little accidents” are part of the joy of painting – and of life.

The “Bob Ross Experience” in Minnetrista is an interactive museum in the room where the popular PBS painter recorded episodes of his popular television show.

And the timing of its opening, when our world faces so much fighting, couldn’t be more perfect.

What we all really need right now is maybe just that soothing voice, positive encouragement, and joyful creativity that came into our homes from a humble television studio in Muncie: the happy little clouds and happy little accidents of Bob Ross.

“It was peaceful and it was affirmative and it was hopeful,” said Jim Needham, retired general manager of WIPB-TV.

“It really teaches you that you can do anything,” added David Tieman, Bob Ross fan.

“The sound of Bob, the original easel, and even the lights bring you right back there,” said George Buss, vice president of visitor experience at Minnetrista. 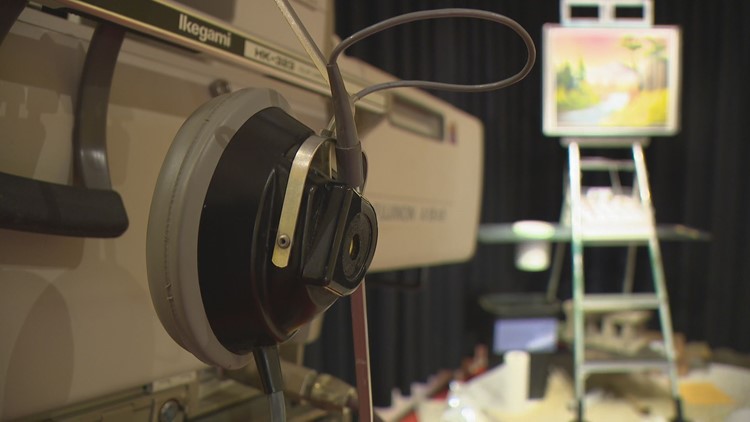 Fans can immerse themselves in his world with this permanent, interactive exhibition in Muncie.

The historic house and studio inside has been converted to an exact replica of the area in which Ross shot most of the episodes of “The Joy of Painting”.

“That was the studio right here. You’re at it,” said Buss. “We have his easel. We have some of his paints. We have paintbrushes. We have original paintings. When you step through that door, you are really stepping into this room, which would have looked just like Bob went in. Down to the carpet!”

This carpet? A thick, orange-red retro bunch that spawns a whole range of memorabilia.

In addition to Ross’ tools of the trade, the museum also has personal artifacts: the Vicks Vapo-Rub Ross used to clean his sinuses before sticking, his hair picks, keys, Marlboro Red cigarettes and iced tea after the show.

Another realistic part of the exhibition: a living room from the 80s. You can see “The Joy of Painting” on a CRT TV, just as so many of us have for years.

“It’s really very similar to what it was,” said Needham, recording the exhibit.

Needham was the station’s general manager when Ross came to Muncie in 1982. Ross was traveling the country doing painting workshops to start a program when he found a home in Indiana.

“We signed up 75 people for the workshop instead of 10 or 15,” said Needham. “They said if you have 25 stations signing up and broadcasting this program, have a second series done. We have 30 stations. The third time we have 100 and it just goes off like a rocket.”

Needham also shared what it was like to be part of the legendary show on a personal level.

“When we finished recording, he would sit on the front steps drinking iced tea and telling stories. It was just a great place for him,” said Needham.

“It was a very small environment, but one that gave him the opportunity to be who Bob was and who Bob was was very attractive not only to the people watching, but to all of us.”

Tieman from Fishers is a huge fan.

Tieman visited the exhibit with a Bob Ross Christmas t-shirt and notebook with every Bob Ross painting that was logged and listed, including those Tieman tried to paint at home.

“I have two seasons per page. There are 31 seasons and 13 per season,” said Tieman, flipping through the hand-drawn list. “I did it like seasons 1 and 2. They’re not as good as him, but I work … I work really hard to make them better.”

For added thrill, visitors can even create their own canvas at the museum on select days, with certified Bob Ross teachers teaching master classes.

“I’ve known about him all my life,” said Dull. “My parents actually watched and painted him when they were together. It’s very cool to be able to recreate one of his.”

Just like on the show, students learn fearless creativity.

You are taught no matter how bad things look on those first brushstrokes, everything will be fine.

“At first it’s total panic. Knowing that you have to commit? But I’ve learned to be positive,” said Dull. “I’m a perfectionist and you know all of these things are supposed to be where they are when you put them on the canvas.”

The museum has expansion plans for the coming year.

Your mission is to ensure that Bob Ross’ legacy for painting lives on.

“And especially in these times we all want to be at peace and do something positive,” said Needham, “and in the middle of a time when we are not sure what is positive or what we can do.” Bob says we can do it. And we know he’s right. “

Schedule your visit to the exhibition on the Bob Ross Experience page at Minnetrista.net.

Why ‘Painting with John,’ as in Lurie, is HBO at its best