Exhibition of the week

Pioneers
Leading commercial galleries offer their samples from influential contemporary artists, from Victoria Miro’s immersion in the work of British conceptualist Stephen Willats to Helly Nahmad’s presentation of Antoni Tapies. All the fun of the fair without leaving your home.
• • Art Basel online until March 27th.

Democracies
This provocative selection of works on democracy, including Richard Hamilton’s Northern Irish history picture The State and Bob and Roberta Smith’s All Schools Should Be Art Schools, can be enjoyed online until the show opens at Tate Liverpool in May.
• • Tate Liverpool online.

Royals and rebels
The V&A has the best collection of Indian art outside of India. This conversation about the history of the Sikh Empire highlights one aspect of the cultural complexity it reflects.
• • V&A, London, online until March 29th.

Picture of the week

Sacha Jafri is on his record-breaking painting The Journey of Humanity in the Atlantis The Palm Hotel in Dubai. Photo: Giuseppe Cacace / AFP / Getty Images

This work by British artist Sacha Jafri, made up of the world’s largest painting on canvas, sold for $ 62 million (GBP 45 million) at auction in Dubai. The Journey of Mankind is divided into 70 framed sections with an area of ​​1,595.76 square meters – the equivalent of almost four basketball courts. Organizers said the price was double the targeted amount and the money went to charities that help children. Read more here.

We have to look behind the scenes at the V&A

Ja Rule sold an NFT Fyre Festival artwork for $ 122,000 – and threw in an actual painting as well

Photographer Charlie Phillips is finally due

Female street photographers around the world showed their inspiration …

… As young mothers, they put their hopes in the American dream

Thomas Demand made a cannabis laboratory out of cardboard

The 24 photo project has reached its 18th year

Molly Goddard turns the volume up in fashion

A new film shows Alvar Aalto a darker side

The Great British Art Tour revealed an inspiration for suffragettes, tarnished hopes, gypsy culture, the dignity of Paul Robeson and riots on the streets of South Wales

Downing Street’s Media Makeover was a blue day for design

The photographer Claudia Andujar captured the threatened Yanomami in Brazil …

… And the Byzantine scholar Cyril Mango

Masterpiece of the week 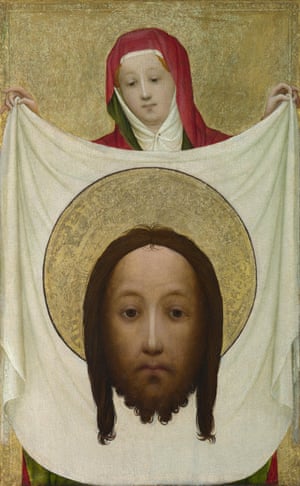 Master of Saint Veronica, Veronica with the Sudarium, around 1420
This German medieval painting depicts one of the scariest and weirdest Christian art traditions. Saint Veronica holds up the cloth that she is said to have offered Christ so that he can wipe his sweaty face while he carries his cross to Golgotha. When he returned her handkerchief, an image of his face was engraved on it. A relic called the Sudarium is preserved in the Vatican. Much more famous in modern times is the Turin Shroud, which is said to show a complete picture of Christ’s face and body, revived by photographic negatives in the 20th century. So try to see this painting as if it were the shroud: a ghostly “evidence” of both the historicity and the supernatural nature of Christ. This sleek, front-facing, bearded image of Jesus was imitated by Renaissance artists believing it was miraculously correct. Even Leonardo da Vinci created his own version of it in Salvator Mundi.
• • National Gallery online.

If you have not yet emailed our regular art and design news recap, please sign up here.

Heist, recovery story of de Kooning painting to be turned into film