Painting of famous 1916 Rising photograph to hang in the Seanad

The photo of Patrick Pearse, who surrendered to the British after the Easter Rising, is one of the most iconic photos this week.

It is also one of the most famous airbrush photographs in Irish history. The three men are Pearse, Brigadier General William Lowe, and Captain Harry de Courcy-Wheeler.

Next to Pearse you can see a woman’s boot and skirt. This was the nurse Elizabeth Farrell, originally sent with a white flag by Pearse to speak to the British about conditions.

She returned to Pearse and the delivery took place on Parnell Street in Dublin near the intersection with Rutland Place.

The 1916 photo of the Pearse Surrender, in which Nurse Elizabeth Farrell’s legs and boots were often cut out of the picture. The artist Sinead Guckian flipped the picture and painted it from the nurse’s perspective

According to a report she gave to Cistercian monks in 1956, she took a step back when the photo was taken so as not to appear in the photo even though she is still visible. Even so, the Daily Sketch in London published the photo three weeks later and removed all traces of it, giving the impression that Pearse had surrendered alone.

Artist Sinead Guckian said she had been fascinated by the picture since childhood and could find out very little about Farrell.

“I wanted to see the woman. That need stayed with me all my life. I wanted to reverse the photo, ”she said.

Ms. Guckian, a native of Drumsna, Co Leitrim, is a former Fianna Fáil District Councilor and Chair of the Leitrim District Council. She graduated from the Institute of Technology Sligo as a mature student with a degree in fine arts. 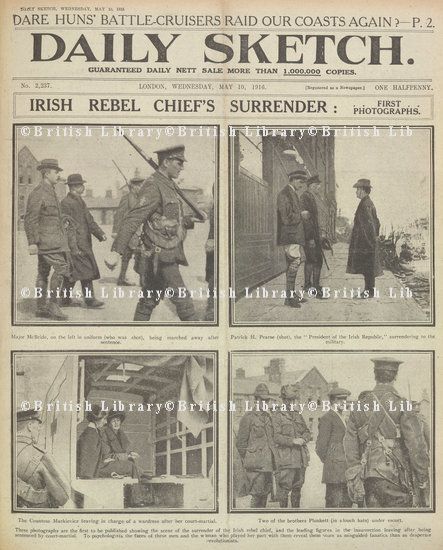 On Monday lunchtime, the painting she created on the occasion of the 100th anniversary of the uprising in 2016 will be presented to Senator Regina Doherty, head of the Seanad, as part of International Women’s Day in the Seanad Chamber.

It will hang in the newly renovated Seanad chamber.

Seanad Cathaoirleach Senator Mark Daly said it was clear that “there are a great many men hanging on the walls of Leinster House,” and it is not a good example to show the many school tours that visit the building.

“We felt that Nurse Farrell’s symbolism, literally erased from Irish history, was the best that could be hung on the Seanad walls.”

Ms. Guckian said: “It is an honor and extremely important to me.”

Coincidentally, Ms. Guckian’s grandfather, Paddy Guckian, was a survivor of the Selton Hill ambush that took place 100 years ago Thursday.

Six IRA officers were killed by the British military while surrounding a house in Selton Hill outside of Mohill, Co Leitrim on March 11, 1921. Paddy Guckian was one of the five refugees.

Ms. Guckian painted portraits of all 11 IRA men in Selton Hill on the occasion of their 100th birthday.