Cat pictures bring plenty of joy to the world

When the world began to fall apart in 2020, Featherston artist Campbell Kneale desperately needed a laugh.

So he started painting cats – in all their nervous, despicable, eccentric glory.

What began as a welcome distraction from a global health and social justice crisis has grown into a phenomenon: Campbell’s cat pictures were not only a hit in his hometown but were in high demand around the world.

Campbell, a longtime painter and experimental musician, started sharing his creations on Facebook last May. He posted the picture and the music he heard while painting – for example “Motley Crue, painting cats”.

The cats in question had a lot of character, cast withering glances at themselves, were caught in unworthy poses while bathing, in “shame cones” in a bad mood and looked at the world with frightened, bulging eyes.

Painted while listening to Donna Summer.

His inbox was filled with commission inquiries, and cats have been shipped to the United States, Japan, Denmark, Italy, and Ukraine [“and heaps to Dunedin”]Finally he was able to devote himself entirely to cat painting.

He even has an alias – called “Catman” by his fellow residents in Featherston.

“I like to think Catman is a mundane superhero,” said Campbell.

“He’s my alter ego, Campbell just makes a lot of rubbish while Catman is a kitsch champion. an unapologetic symbol of modern banality and disrespect. “

Catman first popped up towards the end of last year – Campbell, overwhelmed by coverage of the pandemic, did therapeutic scribbles and drew a few cats in his notebook.

“You were so stupid – I laughed until I was shredded. It was a nice detox.

“I painted a cat and put it on my Facebook.

I received the message: “I love the cat, can I buy it?”

“It raised my eyebrows a bit. But I drew another cat, and someone else wanted it.

“And so it started. There’s nothing smart about it – I listen to music and I paint cats. And yet it was huge. “

An avid painter since his youth, Campbell worked for several years as an art teacher at a secondary school.

He specialized in art with a sociopolitical message, criticizing consumerism, structural inequalities and toxic media culture.

He was best known to music fans for his ambient punk project Birchville Cat Motel, which toured Asia, America, Europe and Australia.

When Covid-19 hit, Campbell, who had isolated himself at home during the lockdown and unable to travel, wondered how to respond as an artist to the looming global catastrophe.

“I was tied to the news. There was so much going on – the pandemic, the climate situation, economic crises, gross inequalities, the terrible way privileged countries dealt with Covid-19.

“I’ve been thinking about how to react [artistically] – and I came to the conclusion that the world no longer needs white, male, middle-aged, middle-aged voices like mine that clog the conversation.

“We need to step back and let the creative voices of marginalized communities like colored people, LGBTQ + and youth hear and amplify. 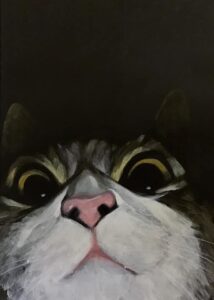 Painted while listening to Caveman Cult.

“It was time for me to shut up and listen. So I thought ‘damn I’m going to paint a cat’. “

When painting his famous cats, Campbell used “normal old acrylic paints” and paints with a darker palette – playing with the reputation of cats in folklore as “shadow creatures of the night”.

In his work he wanted to capture both the splendor and the absurdity of his subjects – “dark gods” who did not excel at making ridiculous faces.

“I don’t want to paint pretty cats. Cats are not a decor; They have their own identity.

“I like to paint them snarky, neurotic, a little inappropriately – with one eye larger than the other, with the tongue out and a muzzle visible.

“They are fun to paint because they are completely unbalanced and so majestic at the same time. They have this supremacist attitude – they call for submission. “

He also likes to share his painting soundtrack with the world, which contains “a lot of gnarled, unsocial protest music” such as black metal, punk, noise and free jazz.

“And a little Donna Summer for fun.”

Campbell said many of his cats came from his imagination, but he had also been inundated with inquiries from cat lovers in the hopes that their pets would receive Catman treatment.

He said he was encouraged by the feedback his cats had received.

“I’ve had customers say they cried as soon as they opened their painting.

“In the art world, it’s absolutely blasphemous to paint something as ‘normal’ as cats. But I decided to create a new normal for myself and paint things that make me and others laugh.

“It was a delightful little experiment.”