Painting Black Skin, An Artist Navigates Success And Loss In A Pandemic Year

It’s been a year since the pandemic started. In the “The Creative Grind” series, ARTery reporters spoke to individual creatives to assess the financial and artistic impact of COVID-19 on a granular level.

Last year, artist Marla McLeod sold a painting for nearly $ 10,000, enough money to pay her current rent for more than half a year. She also worked two jobs and doubled her income. By teaching Art on Zoom, she was able to jump from Tufts University to Southern Connecticut State University without leaving her home.

“So it was really about really having to work with next to nothing – it’s difficult, but if you’re used to living that way, it’s probably fine,” said McLeod. “But now I don’t have to and I feel so good. I feel like my mind feels so free and I can work more.”

McLeod finished her Masters in Fine Arts at Tufts last spring when the pandemic forced the university to close its studio spaces. She moved in with a friend just to have enough space to paint. Her canvases moved with her, occupying wall space in her friend’s house, her sister’s basement, and now in her own little studio in New Haven, Connecticut.

“For me, home is wherever I do it,” she said. “But it’s really important for me to have a space where I feel at home. And there was a lapse of time between the need to be at my boyfriend’s home and have my own space and then the COVID situation and moving to my sister’s house. It was like none of these rooms felt like mine. That bothered me. I did not like it. “

She often says that her apartment feels dry when it’s not full of art.

Layers of fabric adorn several mannequins. She is preparing for a thesis that should have taken place last year. And it did it online. Her oil paintings range from floor to ceiling and are stacked on the wall. Five portraits of black women, friends of McLeod, that convey strength, softness and dignity.

“It was really about their identity and expression of black women and how we have seen them in history and how I wanted to present them today,” she said. 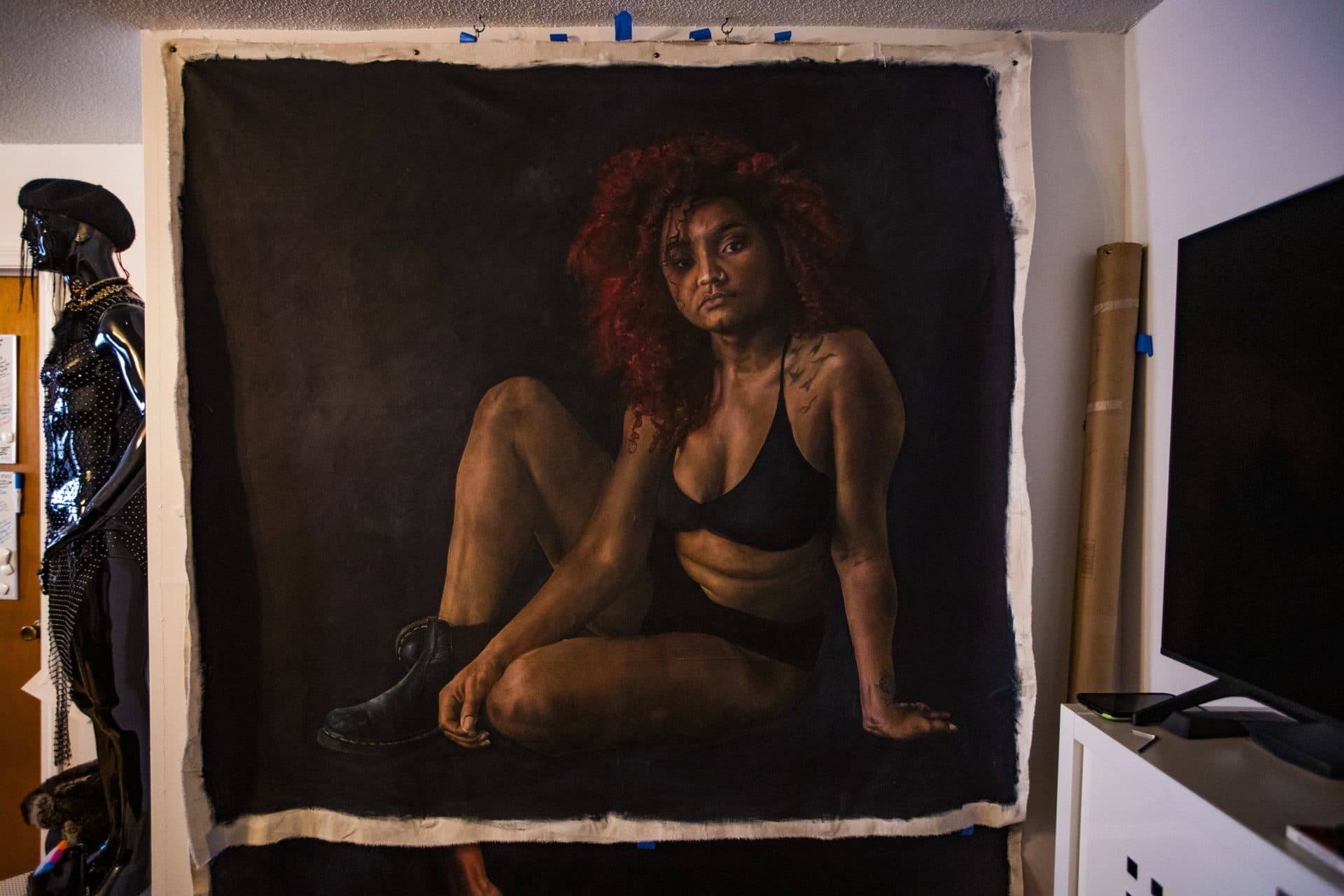 Each painting has a textile inspired by Mali mud cloth that she adorned with symbols of black pride and culture and paired it with words, usually an expression of protection from the mother of every woman.

What McLeod sees when looking at the final painting she completed for this series will always be different from what others see.

Someone else might notice the careful brushstrokes, textures, and colors that bring her large-format portraits to life. You can see the contrast of the dark background to the figure and the vivid way she paints black skin. What McLeod sees as she unrolls that special dear friend’s canvas is loss.

“One of the things about the picture is that I have to concentrate and focus on exactly what I am doing and where I am now, what color I put, where how much of it and things like that,” McLeod said. ” And so on this one I spent more time wiping my eyes and it made me lose focus and lose where I am in a painting. “ 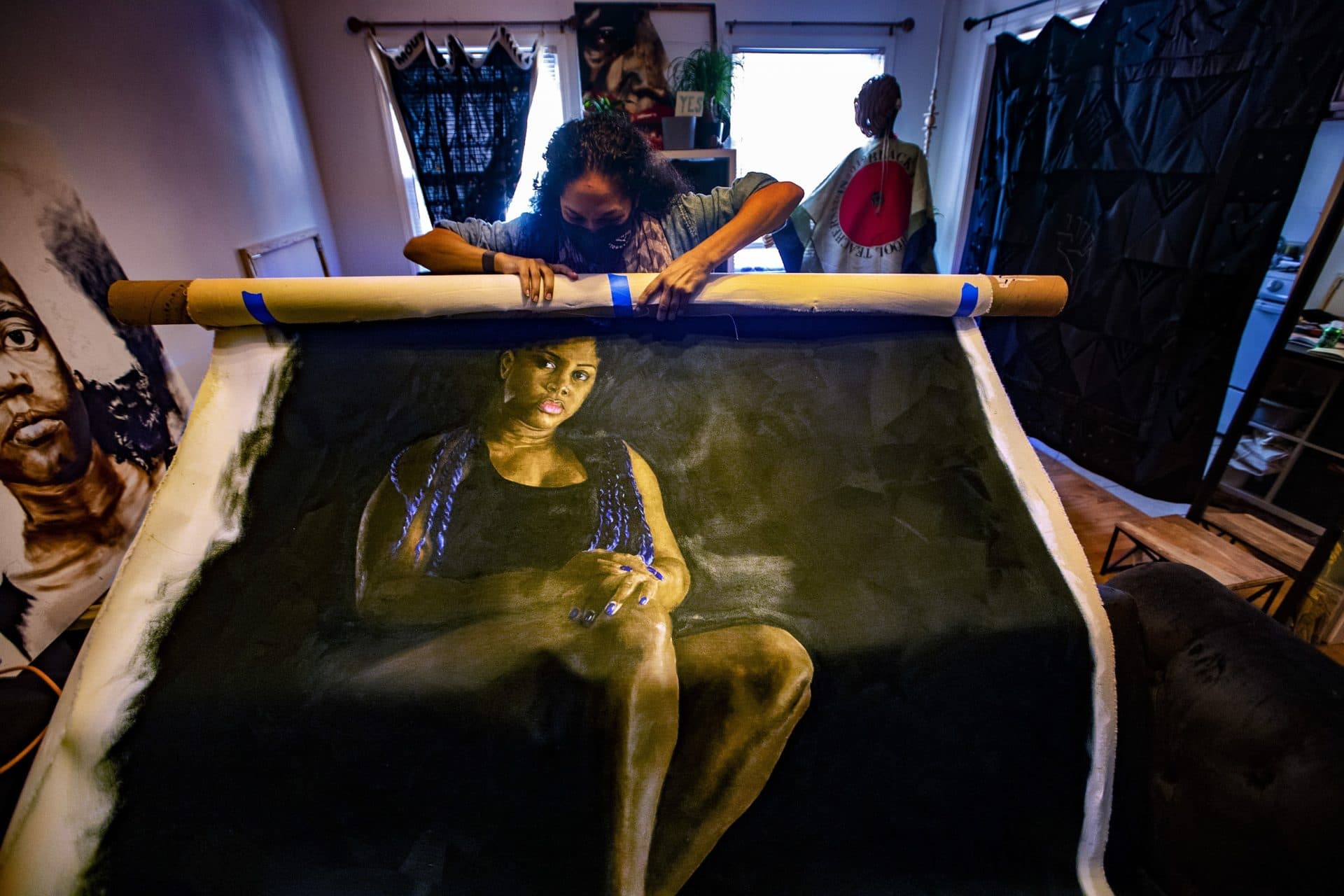 Her brother died in Seattle last year, two days before her thesis was due to end. Everything stopped. She asked for an extension. She spun around, sat in front of canvases, unable to work, and faced this sudden pain of grief.

McLeod is one of three, born in California and raised in nursing homes, not always together. How it passed is still unknown. And because of the pandemic, they couldn’t make funeral preparations. She still hasn’t visited his grave.

“That was difficult. So I had to say in my head that things will go on. Everything is absolutely insane at that time, “she said.” COVID was in full swing. Every time I talked to someone, someone died. His [death] Hit me really hard cause it’s my brother right? It’s just the three of us and really like in life. “ 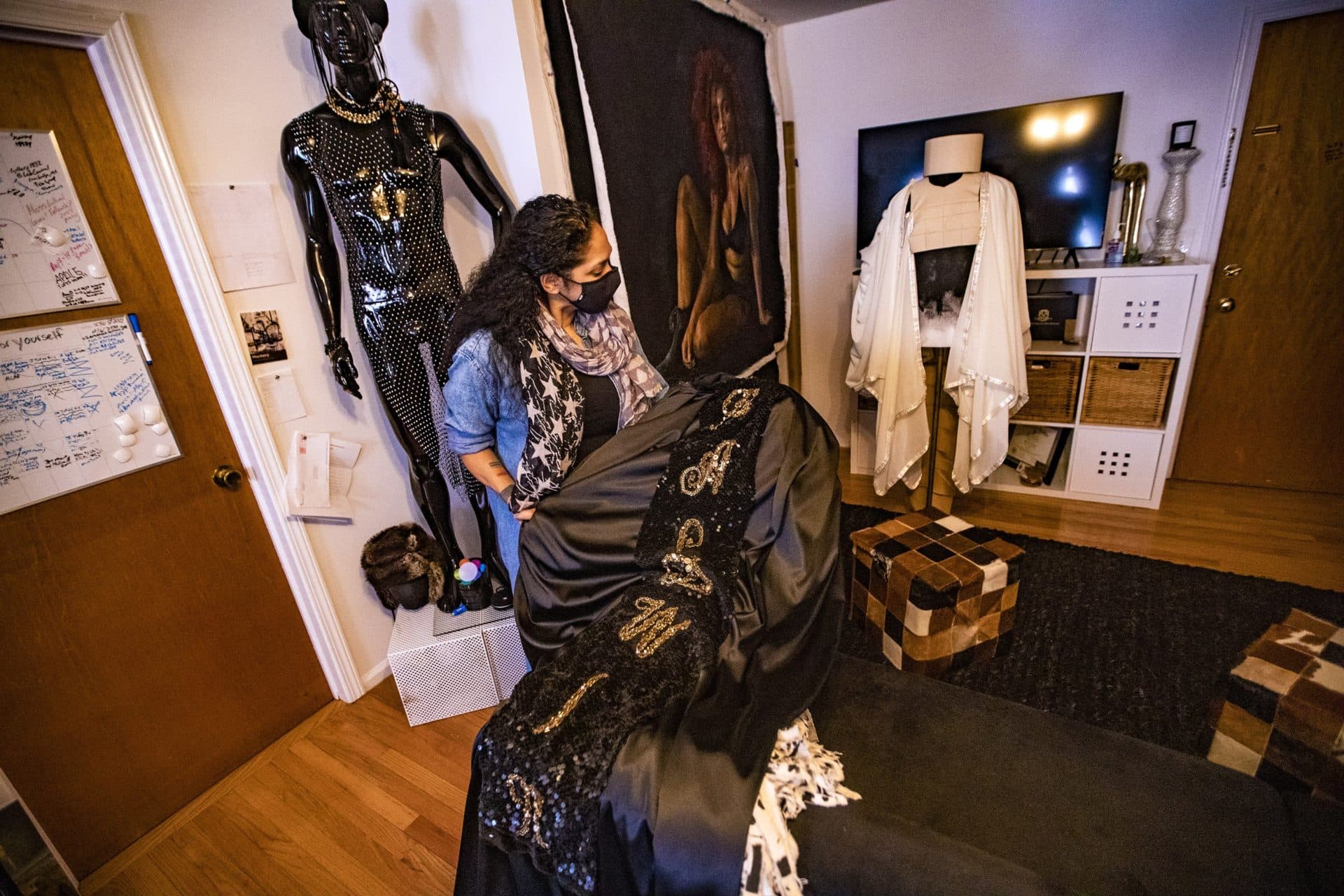 McLeod holds a piece of clothing that she designed by writer and activist James Baldwin in her New Haven studio. (Jesse Costa / WBUR)

McLeod listened to Whitney Houston and sometimes sat in silence. She immersed herself in her canvases and fabric art and sat with her textiles over her sewing machine to make statements about black life. During the entire processing.

What she accomplished remains evidence of that time.

“So when you look at this, what do you see?” I asked her.

“I see … the picture that I was able to complete regardless of the emotional situation I was going through,” she said. “It’s part of why I hesitate to change, you know, because it’s when you just knew you couldn’t. That’s what you can.”

For McLeod, her art continues to serve as both an escape and catharsis. It enables her not only to survive, but to live.

Mayor of N.J. town under fire for moving $125K painting out of the public eye and into his office

Family of Sir Winston Churchill’s top general sells painting by him for £1.55 million