An ink drawing by a famous Australian artist was rediscovered after nearly 45 years and lost in a collection of over 1.5 million objects in a northern Tasmanian museum.

The Queen Victoria Museum and Launceston Art Gallery (QVMAG) found the artwork by Brett Whiteley, acquired in the 1970s.

The drawing Waves V was bought by the gallery in 1976 and added to the museum’s collections.

But the item was never seen again and was never on display, prompting the museum to contact Tasmania Police in 2018.

Launceston City Council used to estimate the work was worth around $ 30,000, but efforts are now being made to reevaluate the art.

The museum carried out a review of its archiving practices and a collections audit has been in progress since 2019, which has led to the rediscovery of the artworks.

Tracy Puklowski, general manager for creative arts and cultural services, said the artwork was found in one of the museum’s drawers earlier this week.

“The work wasn’t photographed so we didn’t know what to look for visually. I think this is a really interesting challenge when you’re working with a missing object,” she said.

“You can see in the lower right corner that it is his seal or one of the seals he used.

“The staff were very sure they knew what they found, but without this independent review, all you have to do is use a bit of caution.”

The ink drawing has now been checked.

The aim of the audit is to create a database with the 1.5 million QVMAG objects. This is the first full audit of the collection since the museum was founded in 1891.

By the time the audit began, only around 18 percent of the museum’s objects were registered in the database.

QVMAG staff believed the artwork may have been incorrectly cataloged due to an outdated method of recording in the 1970s.

Tracy Puklowski, QVMAG General Manager Creative Arts and Culture, and Albert van Zetten, Mayor of Launceston, were delighted when they confirmed that Whiteley had been found.

“At the time there were a lot of stories that someone could have taken … it was in a drawer all along, well camouflaged,” he said.

“It’s something that was categorized incorrectly, it probably didn’t have the right name, so I can understand that we didn’t find it at all.

“As the museum has continued to grow and develop over the many years, 130 years, things have probably been done quickly at times.”

The museum has now committed to digitally documenting every object, from the smallest native fleas to the largest railroad car.

Each artwork or object is briefly removed from its storage area, the details are entered into the database, a simple ID photo is taken and a barcode is assigned before the piece is returned to its storage location.

Once the items are entered into the database, they can be uploaded to an online catalog for audiences around the world to use and research the collection.

Christine Hansen, the museum’s knowledge and content manager, said the audit was a wonderful opportunity for QVMAG.

“Ultimately, a museum keeps records of the past and present for the future, and we need to preserve them as best we can,” said Ms. Hansen.

“We are grateful for the opportunity to have the QVMAG collection carefully evaluated and documented so that current and future communities can appreciate and learn from it.” The works of the late artist Brett Whiteley sell for millions. (

Whiteley is one of Australia’s most famous artists, winning multiple Archibald, Wynne and Sulman awards.

He worked in a variety of media including painting, sculpture, and graphics. However, he became known for his paintings of nudes, interiors and harbor scenes. 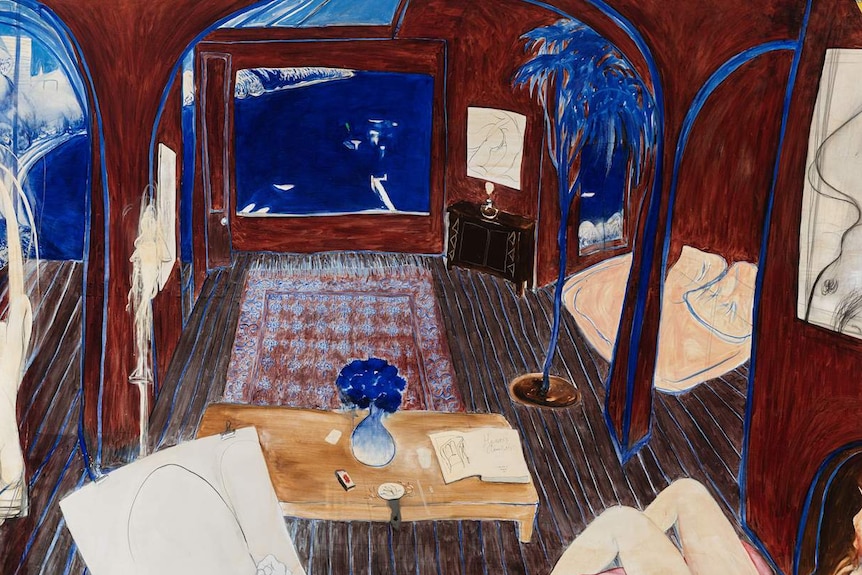 “It’s not necessarily representative of other styles he’s worked on over the years, but it’s a very interesting part of his career,” she said.

In 1992 Whiteley died of a methadone overdose on the south coast of New South Wales.

His home and studio in Sydney’s Surry Hills have been converted into a museum managed by the Art Gallery of NSW.

Whiteley’s Waves V will be on display at the Queen Victoria Art Gallery in Royal Park in late March.