‘It’s going to be inspiring’: the Ghan’s transformation into a moving painting | Northern Territory holidays

When painter Chantelle Mulladad saw her work of art Crossroads enlarged and wrapped in bright colors around three carriages of a world-famous train, she said she was “shaking”.

Mulladad is an Arrernte woman from the remote indigenous community of Ltyentye Apurte, where she works with the Keringke Art Center, which her mother co-founded.

When she met the Ghan at Alice Springs station on Thursday morning, the train had just broadcast her art over 2,973 km in Australia from Adelaide to Darwin before it embarked on its first official commuter expedition of the season: again half as long, from the upper one End back to the red center.

Chantelle Mulladad’s artwork is the largest exhibition ever shown on the Ghan. Photo: NTMEC

Mulladad was surrounded by a group of media outlets when she first turned her eyes on her piece.

“My heart was beating so fast,” she told Guardian Australia. “I was very nervous.”

Crossroads was commissioned for the Parrtjima Festival, a 10-day festival of indigenous arts that opens on April 9th. Curated by Rhoda Roberts, the program includes lectures, workshops, and live music, but revolves around light. Immersive lighted sculptures are dabbed through Alice Springs Desert Park, and a nighttime light and sound show – which has been controversial – is projected onto the vast backdrop of Yeperenye or the MacDonnell Ranges.

The festival was canceled last year due to the pandemic. In 2020, the Northern Territory lost more than $ 1.6 billion in visitor spending, and further year-over-year declines are expected through March 2021.

But now the borders are opening again. The Northern Territory Major Events Company estimates that 80% of Parrtjima visitors will come from the interstate, a significant increase from 2019.

Fake or Fortune guest crushed as painting valued at…

Mulladad’s piece – a vibrant collection of circles in circles, in green, purple, pink, and blue, crashing against the red earth and clear blue sky of the desert – will be part of the Merging Kulcha installation at the festival: a train of five illuminated camels, each over three meters high, built in a mosaic of colored glass that is illuminated from above.

But their ark was commissioned a second time, as a sample to wrap the first three wagons of the Ghan in another wagon with an accompanying installation. 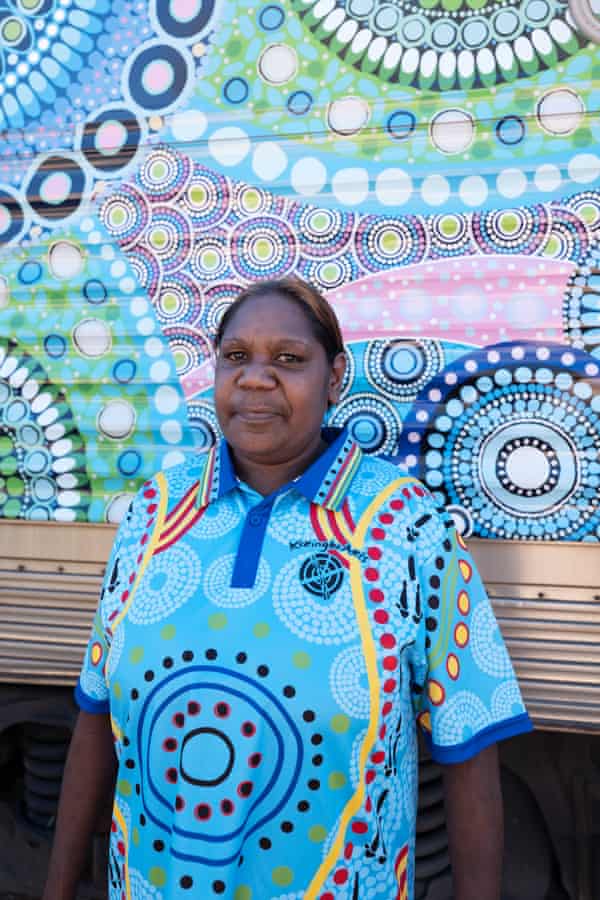 “My heart was beating so fast,” says Chantelle Mulladad when she first saw her artwork on the Ghan. Photo: Mark Fitz

Mulladad’s work fits a great railroad line: it tells a story about travel.

“Crossroads was based on my teenage years,” she says. “I had to choose a path and I chose the right path to make something of myself and become an artist.”

The other way? “You know, wild young teenage life,” she laughs.

Letting her works of art travel from top to bottom in Australia “means a lot to me at the moment,” she says. The print is wrapped around the ghan for as long as possible – an estimated two weeks, although the adhesives were already peeling off in the heat of Thursday.

While it’s not the first time the ghan has been wrapped, Mulladad’s work is the largest display ever shown on the train.

“I think it will be inspiring for the boys too, you know? If you see my painting on a train, you may want to choose to be an artist like me – and choose the path too. “

Mulladad’s original design, Crossroads, is part of the Parrtjima Festival, which opens in Alice Springs on April 9th