T.The creature comes into view pretty slowly. It’s like staring into the bushes, realizing that there is something there, then picking out its parts and putting the whole together, which suddenly magically comes to life and gently steps forward. A giant tortoise. Mary-Anne, our guide, laughs: “A turtle’s mouth always reminds me of my grandmother.” As if hearing that, the animal’s wrinkled lip curls slightly into a sad old grin. The panels on the bowl catch the light and the shadows under the leading edge deepen, capturing subtle flashes of magenta and ultramarine. Without Mary-Anne, I would never have noticed such details.

A trip to the Galapagos Islands would be a very nice thing during these times, wouldn’t it? And I’m there in my mind at least, practically attending a four-day trip – on Zoom – with a group of artists led by Mary-Anne Bartlett, the founder of Art Safari, who has been to the archipelago several times. During the pandemic, she offered virtual tours and workshops. But can such a visit bring any satisfaction, such as the pleasure of actually walking? It’s certainly a lot cheaper, but would the relatively small fee be better saved for an actual trip?

A direct resemblance to real travel is quickly apparent. On the first day, I sit in front of my laptop with a colorful collection of art equipment and I feel like the person who ends up in the tropics with a woolen sweater and thick socks. The watercolor paper I bought last minute from Amazon is half the size I imagined. The lead in my pencils has broken. The brushes are peeling off. In addition, there is an incomprehensible foreign language to be learned: gouache, gesso, brusho. Plus words that seem to have taken on new and precise meanings that I need to master. What is a flat wash? The opposite of a bumpy bath?

The author of a virtual art class in the Galapagos Islands. Photo: Kevin Rushby

Mary-Anne soon solves all these problems with newcomers and we are brought – via the magic of PowerPoint – to Puerto Ayora on Santa Cruz Island. Having not been to the Galapagos Islands, I had mistakenly imagined they were uninhabited and watched only by the spirits of Victorian naturalists determined to preserve the sacred temple of evolution. Not correct. This is a busy city full of restaurants, shops and market stalls. Mary-Anne takes us to the women who run the fish market, each with an accompanying sea lion cleaning up the discarded catch, or at least with every bite the pelicans don’t sniff. We walk down to the jetty and marvel in disbelief at the eagle rays and sharks that cross under our feet. The photos are cleverly chosen: nothing too sleek or neat without trying to work out the tourists with sketch pads and cameras. The understated effect is to put us there in the frame.

Now let’s settle for a little background knowledge, including the artists who came before: characters like Charles Darwin, William Beebe, and Conrad Martens. We get advice from Robert Fitzroy, Darwin’s captain on the Beagle, “watch, study, and collect.” Perhaps most importantly, we begin to sense what happens when you don’t take photos. Like us, Darwin couldn’t, so he looked closely and sketched endlessly. Even if I had taken an art trip to the Galapagos Islands, I know I would have snapped like a machine gun. The music of my trip would be the sound of a camera motor drive. Not this time. Could that be a blessing? Susan Sontag said: “The need to have reality confirmed and experienced through photographs is an aesthetic consumerism that everyone is now addicted to. Industrial societies turn their citizens into image junkies; It is the most irresistible form of mental pollution. “And that’s what she wrote almost 20 years before the smartphone. 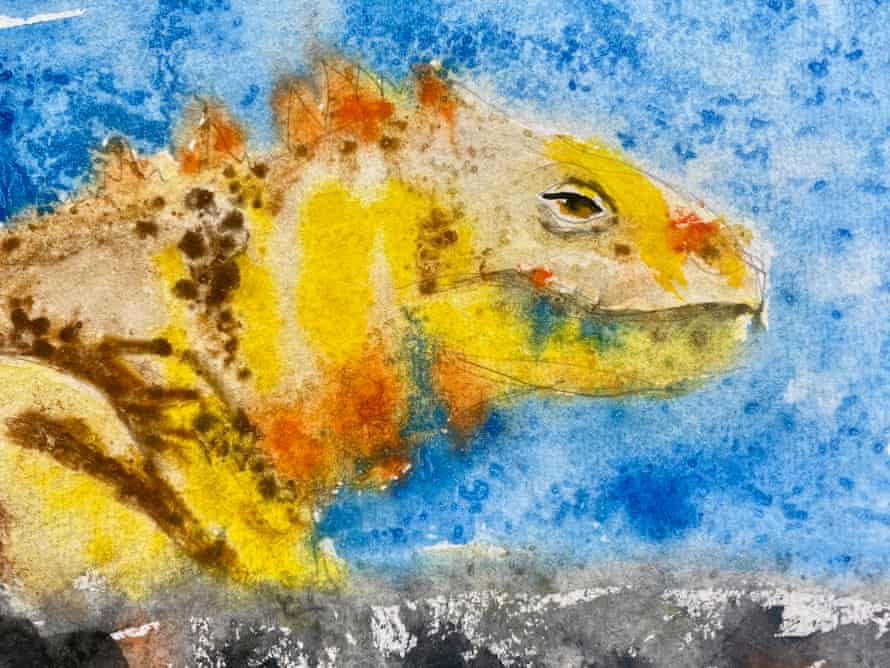 We’re not that puristic. Photos are necessary for our goal. Mary-Anne announces it’s time to start work and a series of images of animals flashes: frigate birds, albatrosses and iguanas. We have two minutes each, starting with pencil, then switching to brush and trying to draw with color. The meaning is immediate: I know within 30 seconds whether I’ve caught a real line or whether the piece is binward-bound. And I look intensely. “Try it out without looking at your work,” suggests another participant. Some of the group are professional artists which will come in very handy, others are beginners like me which is comforting. 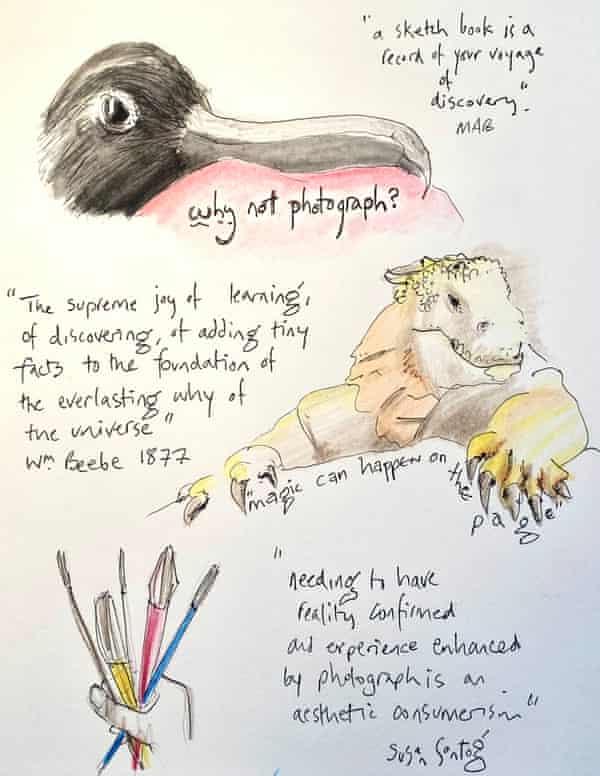 Page from the writer’s sketch pad for his virtual trip to the Galapagos Islands. Photo: Kevin Rushby

After a tea break, we sit back and watch Mary-Anne draw boobies – the blue-footed variety. Then we try. In the evening there is a live webcam session with sea lions. The advantages of the two-minute sketching discipline are obvious. The next day the time limit is halved to one minute and then to 30 seconds. Frigate birds turn into a few brushstrokes, and sometimes, in a rare moment of revelation, one of those streaks captures the creature. Was this how the cave artists felt 44,000 years ago when they conjured wild pigs made of red clay on a stone wall? We spend a lot of time looking at each other’s work, looking over our virtual shoulders and discussing. Then we watch Mary-Anne do an entire painting, taking valuable advice in the process.

On the fourth day, we sketch turtles and birds in less than 15 seconds. “Go on,” says Mary-Anne, “and slowly your ability to keep the picture of what you see in your mind’s eye will expand.” I am slowly realizing how much more ambitious this trip is than any earthbound one. We reorganize our perceptions, our brain architecture. We have satisfied our hunger for photos and instead look deeper.

When we finish, I realize that I am not looking to go to the Galapagos Islands. I want to sit down in front of the bird feeder in front of the kitchen window and try to paint the great spotted woodpecker that has come to visit. Lockdown forced this unusual trip on me, but it turned out to be one that I’m very excited about.
• Art Safari runs regular virtual art tours – upcoming ones include Namibia (January 28-31, £ 140) – and art tutorials like Wake up your Watercolors (January 27, free).