By Jemma Carr for Mailonline

One dog wasn’t particularly pleased when its owner decided to imitate the dog’s panting.

Dillon Wyant, 26, filmed himself getting an impression of his 10-month-old Argentine Dog, Kronos, at his grandmother’s home in Vinton, Louisiana.

In the clip, the puppy is sitting up straight and looking directly at Mr. Wyant while he’s in bed. 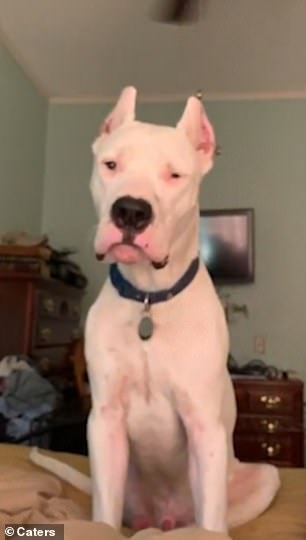 The dog gasps with its tongue sticking out.

Mr. Wyant, tired of the noise, imitates the puppy’s noise.

As soon as Kronos hears this, he closes his mouth and curiously tilts his face to his owner.

The camera then pans around to show Mr. Wyant pulling a face and going straight back to his pooch. 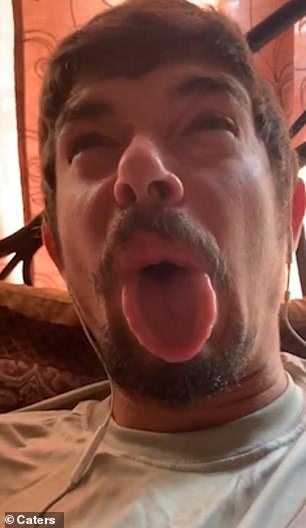 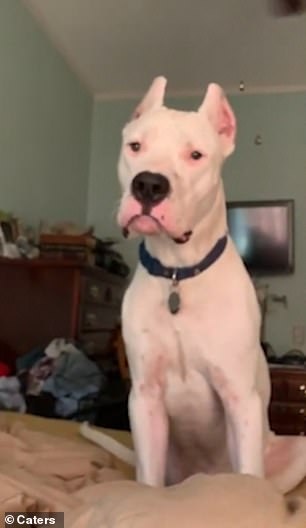 The camera pans to show Mr. Wyant making a face with his tongue out. As soon as Kronos hears the gasping sound, he closes his mouth and curiously tilts his face to his owner

Mr. Wyant then stops and turns the camera back towards Kronos.

Kronos stops again and seems tired of it, and Mr. Wyant pans the camera back to him.

When Kronos is seen again, he stares directly at Mr. Wyant, who breaks out in fits of laughter.

Mr. Wyant shared the clip on Twitter with the caption, “You don’t like that either, do you?”