At Peabody Essex, the sun sets on old ideas about maritime painting

It’s probably no coincidence that Richards’ thundering seascape is most likely to swing deeper inside with a similarly turbulent, enigmatic shoreline by Cherokee artist Kay WalkingStick, five galleries, and dozens of works. Whatever the intent, the curators bypass obvious statements – that these coastal generations belonged to people for thousands of years before European incursions – with one ending (spoiler alert) that is a deliberate whimper, not a bang: the somber, dark one Moodiness of Marsden Hartley’s “Storm Down Pine Point Way, Old Orchard Beach”, from 1941-43, a cloudy beach landscape at night.

In fact, the two paintings that make up the case of the exhibition the most aren’t even here: two massive works by Canadian Cree artist Kent Monkman, maritime scenes shown for much of the past 18 months in the great hall of the New York Metropolitan became museum (to be fair, they’re huge). In each, Monkman rebuilds characters and scenes from a series of European history paintings into epic tableaus that re-center indigenous peoples in North American waters. At Peabody Essex the co-curators of “In American Waters” Austen Barron Bailey and Daniel Finamore begin their catalog with a direct comparison between Monkman’s work and the career of Edward Moran, a leading marine painter of the 19th an “extraordinary, nationalist, yes imperialist Character”.

But her show defies polemics and instead encompasses a breadth of representation that both reformulates the genre and tarnishes the idea of ​​a thesis in general. Those who tire of exhibitions that feel like lectures on social justice might be relieved. But whoever applauds the sharp turn to topicality in most museums these days will not be disappointed. “In American Waters” covers all standards (although artists like Fitz Henry Lane, their dizzying tall ships and the foggy-bright sky always make standards seem fresh). And the exhibition itself is put together under practical headings rather than narrative chapters (one gallery is called “Just Offshore”, another “In Port”). 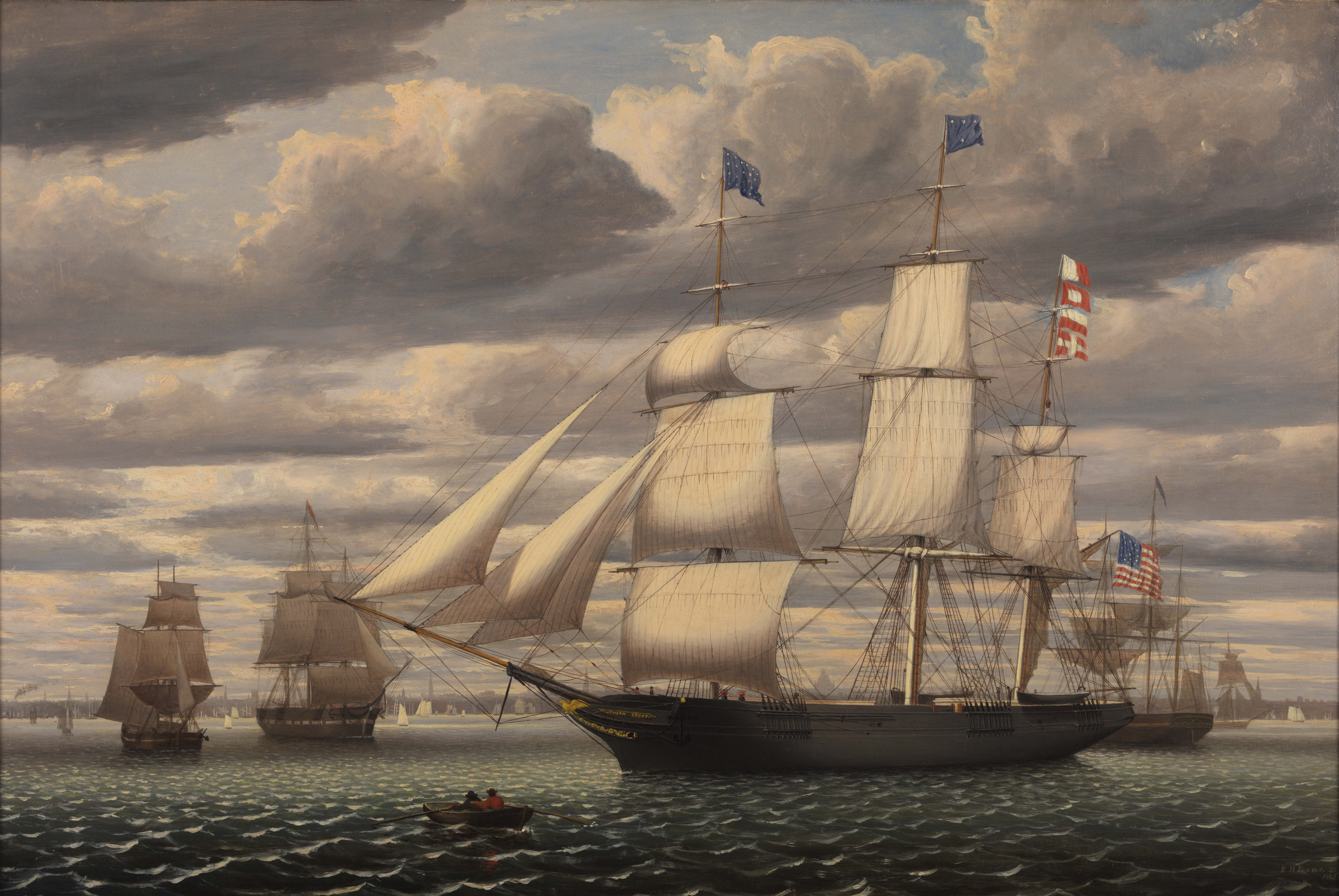 Still, “In American Waters” subtly builds marginalized views into the smug saga of American seafaring – one that encompasses the role of the sea not only in warfare and trade, but also in immigration, labor, exploitation, and the Middle Passage. The broad view of the show is both inclusive and inconclusive, and makes parallel stories rub against each other. They’re uncomfortable and surprising because they should be.

And there are moments. Swing to the left of Richards’ roaring sea and you will see little Arthur Dove, cool and glowing, with a pale moon looming over a sinuous sound of waves. In the next room, a distant line of sight connects Dove with Georgia O’Keeffe’s “Wave, Night” from 1928, an abandoned, almost abstract scene of dark water under a black sky. 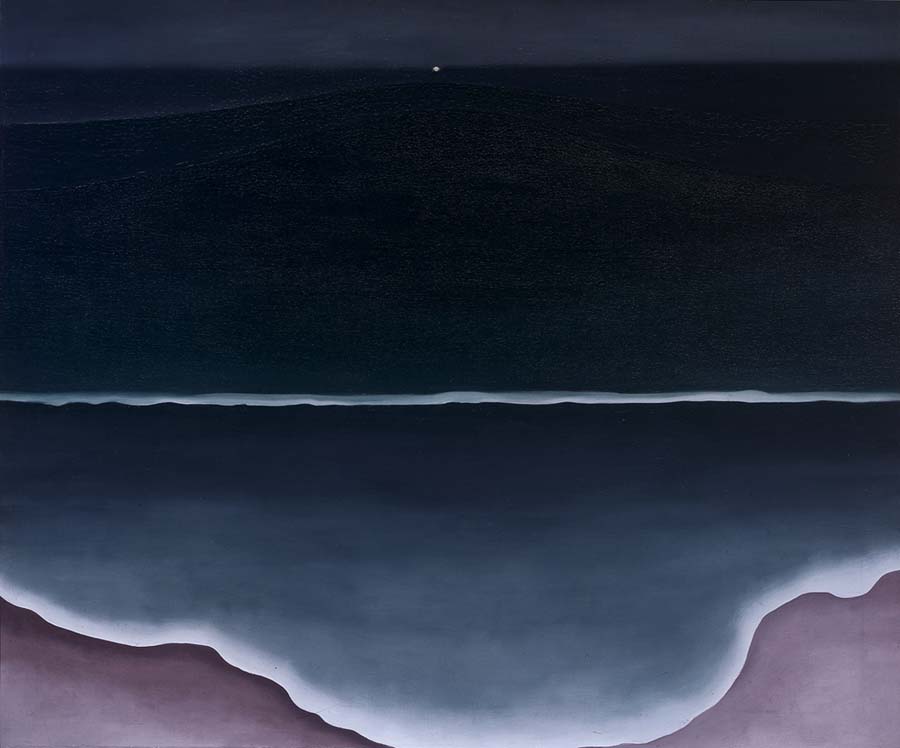 In a room called “Horizons”, “Wave, Night” joins a series of works that should exceed expectations from the start: Richard Diebenkorn’s angular, almost abstract seascape from 1971, “Ocean Park # 48”, shows a series sharp intersecting lines and pale washes. Kerry James Marshall’s 1992 “Baptist” is chaotic and threatening, a metaphor for the conversion of enslaved people to Christianity after the ocean voyage that brought them into bondage. In addition, a small work by Norman Lewis from 1975 entitled “Untitled (Red)” – Lewis was a merchant seaman, as the show taught me – shows crimson, pale blue and black knots, the violent excitement, black and at sea too be.

Not far away, another canvas screams to be seen: John Frederick Kensett’s “Sunset on the Sea” from 1872, a retinal-glowing sunset with a clear horizon line dividing gentle waves and fiery skies. Even without his gallery colleagues, the work appeared maudlin, its carefree embrace of the sublime by itself. But it also raises an important question about coexisting visions of universal subjects and the vague notions of right and wrong.

And that’s what In American Waters is about, in my opinion. It depicts simple American hubris and puts it alongside all the havoc that marginalization has wreaked the country. Scenes of great privilege rub against their anathema: Julius LeBlanc Stewart’s “On the Yacht ‘Namouna’ Venice”, a pretty Post-Impressionist painting from 1890 on board the opulent steam yacht of New York newspaper mogul James Gordon Bennett Jr., shares the wall with Jan Matulka’s “Blick vom Schiff”, 1932, an open, almost cubist view of the bone-breaking work on a fishing trawler, kept in primary colors. 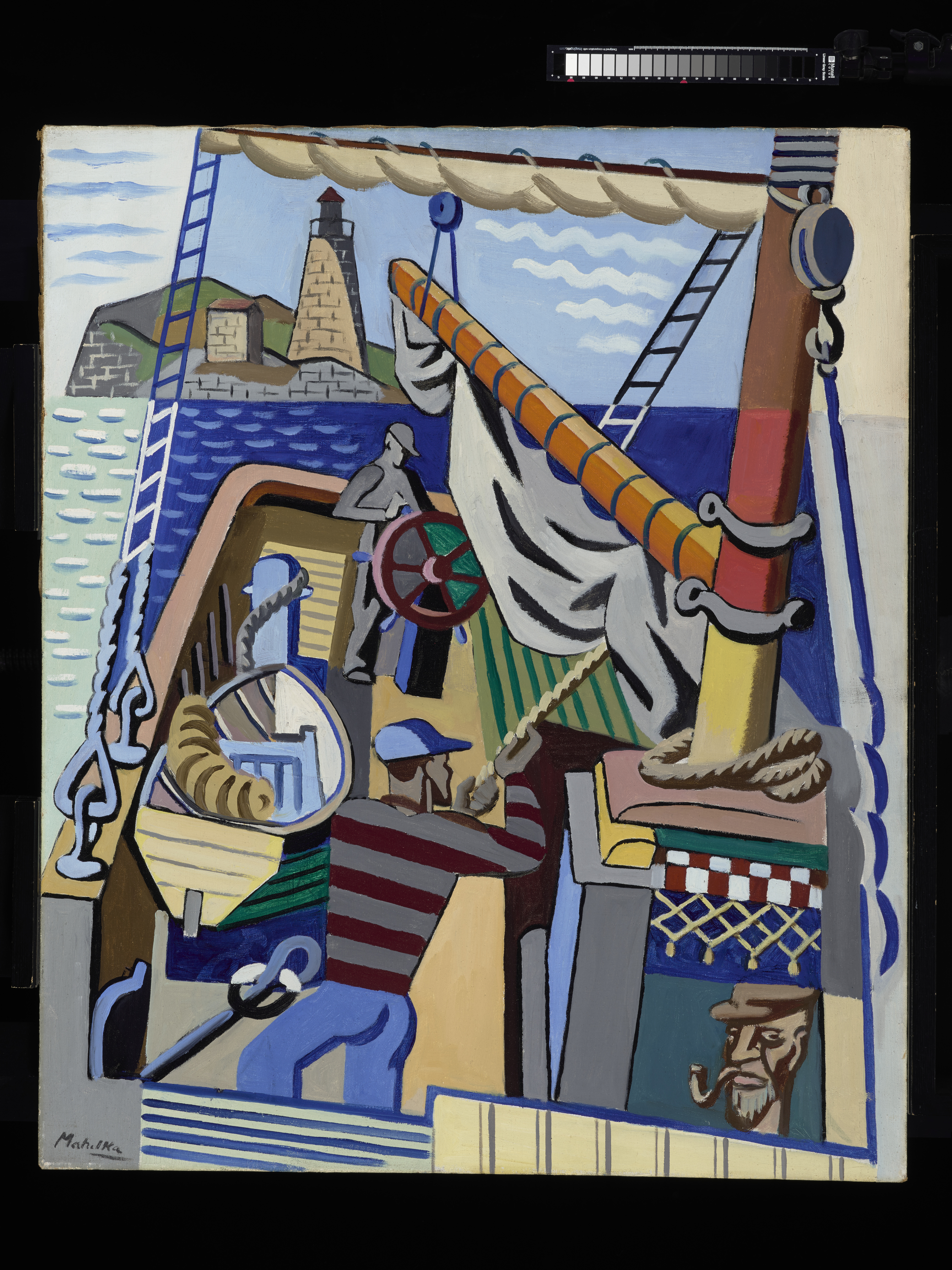 Jan Matulka’s “View from the Ship”, around 1932.Courtesy of the Philadelphia Museum of Art

One gallery nominally dealing with portraits, both of ships (yes, a thing) and of people, includes a 1680 self-portrait of a man named Thomas Smith (who may have been a naval officer) with the sacking and ruin of an English- Dutch attack on a North African Barbary fort through the window – the violent, transatlantic pursuit of supremacy that dominated the early colonial period, compact in frame.

“In American Waters” isn’t always that subtle. A section called “Travel” – simple enough to be complicated – spans the breadth of the subject to delve deeper into the country’s brief history from country to country. Let’s start with the mandatory: The aspiration of a young nation to become a global maritime power is reflected in Titian Ramsay Peale’s romantic view of the indigenous islanders who began their stoic, traditional life in the South Pacific in the 1840s. Or in William Bradford’s scene of a noble crew of American sailors stuck in northern ice floes in search of discovery. Everything feels like a target to be knocked down – and that’s exactly what “In American Water” does. A small, idyllic work by an unknown artist captures Navassa, an uninhabited Caribbean island that was claimed by the United States in 1856 to harvest guano – largely using slave labor from neighboring islands. 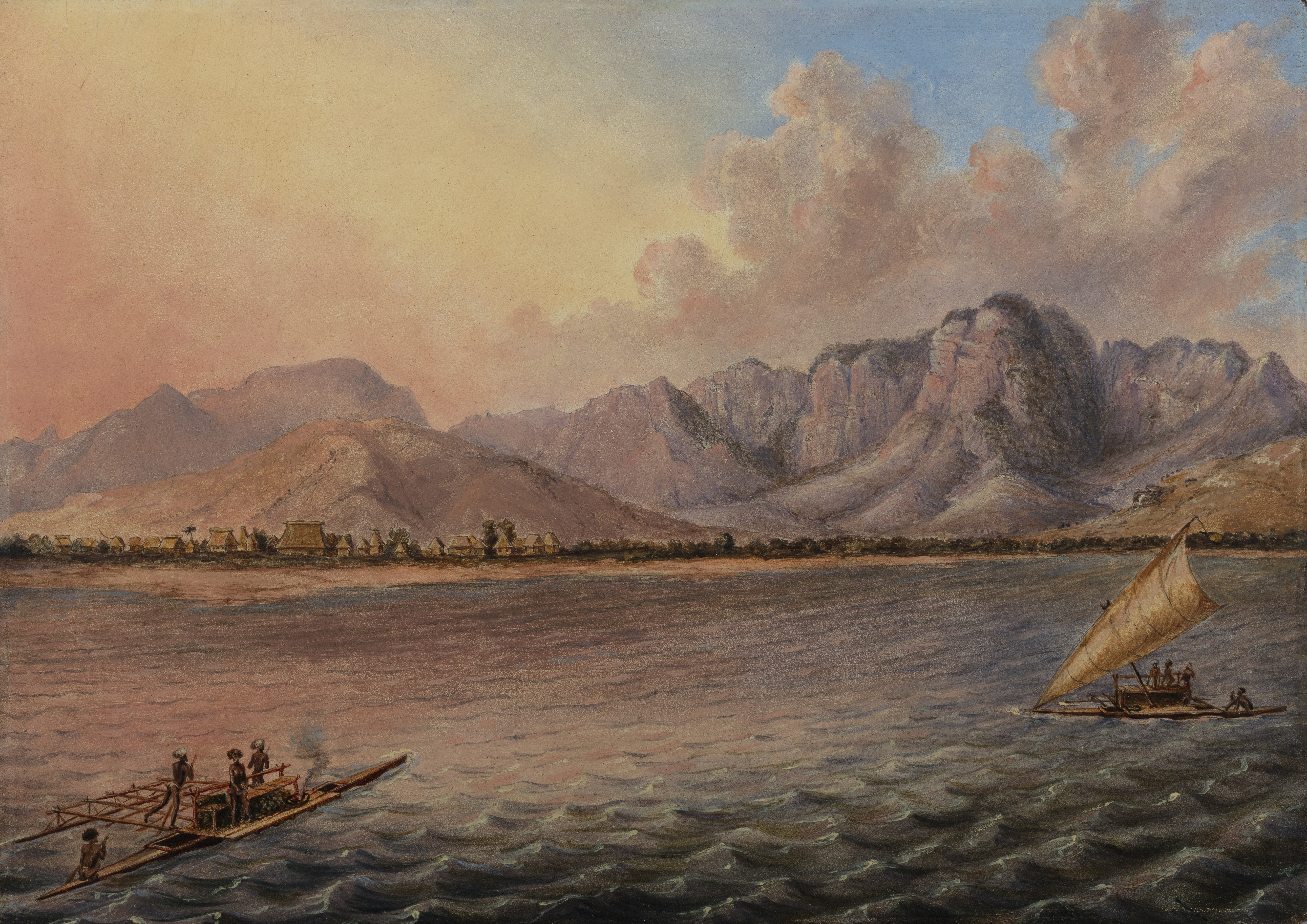 In the next room the counterpoint rises most strongly with a small picture of a schooner on heavy seas. The artist, a well-known ship portraitist named William G. Yorke, would have done something like this a dozen times in his career. This one was different. The title of the work, painted in the 1880s, is “Slave-Yacht Wanderer” with a renegade ship that brought Africans to the American coast long after the importation of enslaved people was banned. It’s a scene from the Middle Passage in its harrowing form: Africans waiting on deck to be thrown overboard by the sharks while the ship tried to lighten its cargo while a government patrol came down.

His gallery colleagues are pictures of cramped tween decks in nameless ships full of immigrants pursuing a new beginning and a new life. Immigrants and enslaved people shared hardship – discriminated against, degraded, denied basic rights – if not remotely to the same extent. Yet “In American Waters” digs through these generation-old rifts to arrive at this point: A nation steeped in trauma-induced differences and still grappling with its consequences.

Can it really be that dark? Yes and no. The last passage of the exhibition is dominated by a towering work by Amy Sherald, two black couples, the women sitting on the shoulders of the men under a cloudy sky on the beach. It is a hypnotizing picture – colors light and primary, sand warm, sky blue, faces calm, calm, clear. 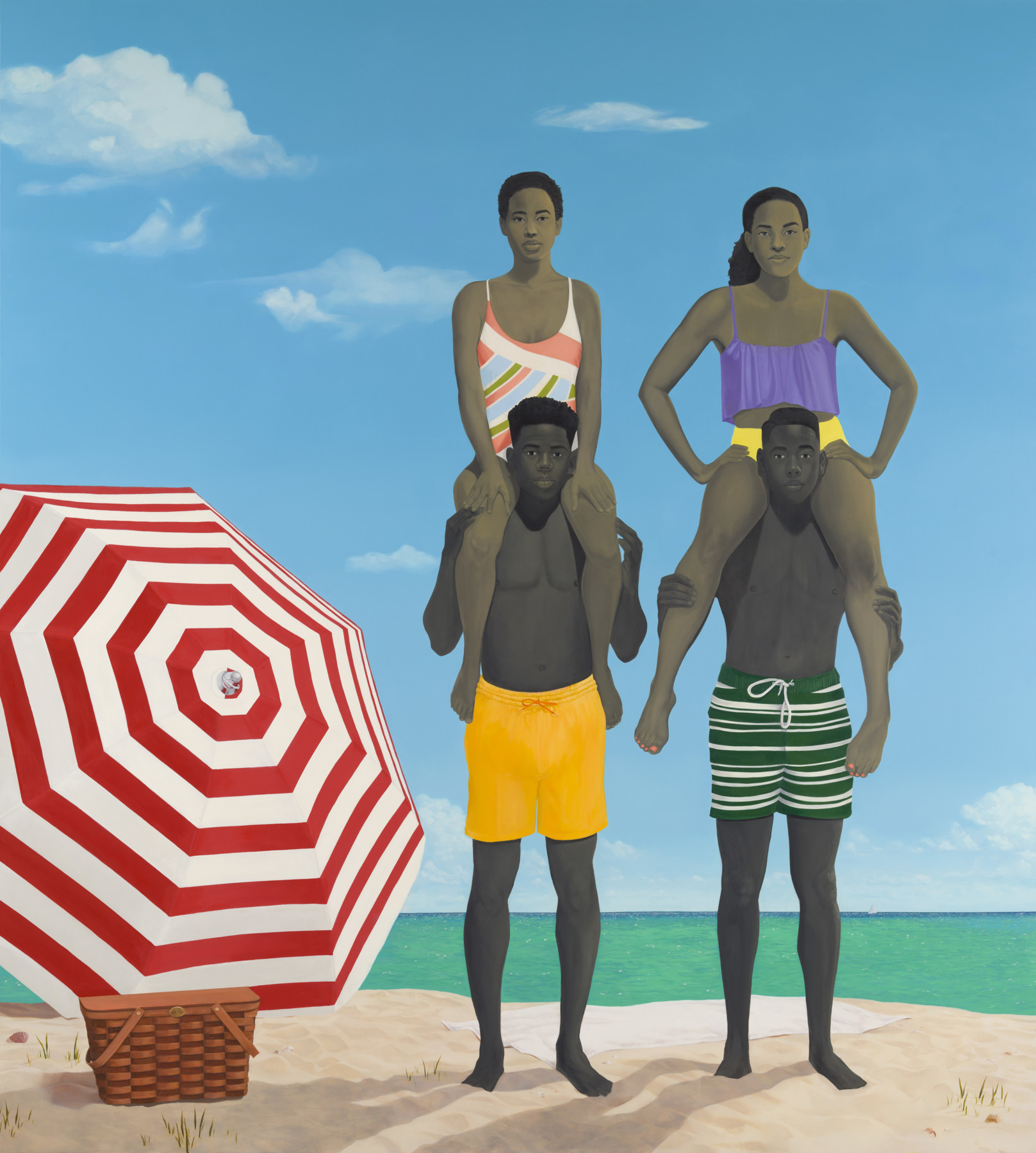 The picture is an invitation, an invitation to see everything that you could see. Here’s mine: the sea is a place of pleasure, after all, despite (or perhaps because of) its deep complications. After all the depths of darkness, “In American Waters” lets us step into the light with dignity.