Finished! I worked out a week before Christmas this year to try a 10 by 6 foot vertical painting. No commission requirements, no ordained subjects from above, no style requirements or careful design and drawing … just my personal work which I have called “trout fishing”. The fish shapes are painted with pearlescent iridescent paint, not white.

The fish are painted with iridescent paint.

My vague plan was to use big brushes and lots of paint to draw on my water themes in the landscape and let them tear apart. I can’t express how dedicated I was, how happy I felt when I finished last night. This is the best gift I’ve given this shitty year.

Honestly, I wasn’t sure I could pull it off any more on a vertical canvas. 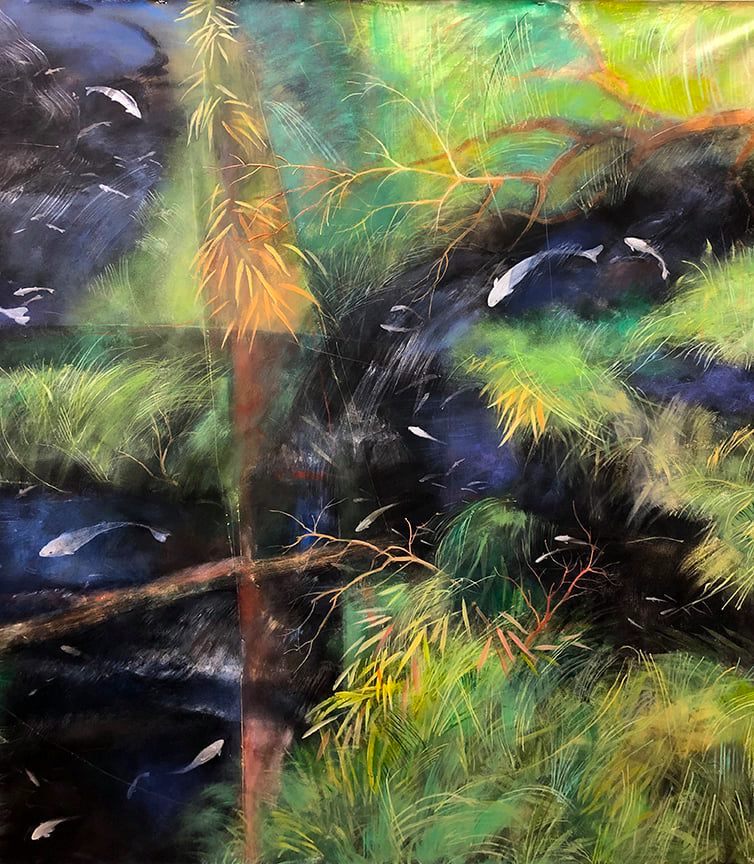 As I began to put the first paints and layout of space on my canvas, I remembered my summers of my days when I used my can of worms or a jar of grasshoppers and my fishing rod to hit small Pataha Creek in Pomeroy, Washington and off my bait hook spilled into a promising eddy hoping I could catch a really big trout to take home and show to my dad (an avid fly fisherman). Father had worked with the state hatchery in the Tucannon Valley to supply the creek with fat breeding rainbows for trout, provided the Pomeroy city commission stipulated that only children under the age of 14 could fish the creek. My father and I even helped the hatchery one spring with its annual creek supply. The fish were transported in a tank truck that looked like a milk truck … and a large long flexible hose attached to the tank when we stood on the upper bank of the Pataha (just behind the grain elevators) and the rainbow trout shot into the water. .. Thrup! Thrup!

There were little native rainbows in the creek, too, and they were far smarter than the tame hatching fish that swam downstream and took the bait no matter what.

This experience has shaped me forever. Between the ages of 8 and 14, I was basically a wild kid over the summer. Mom packed me lunch and I was gone all day until I heard Dad’s sweeping whistle to call me for dinner. (5 minutes to High Tail Home … no excuses!) I learned where the nettle spots were, the spearmint for mums and dads juleps, how to hold and cook the occasional crawdad, and where the beavers and muskrats and yes the rats roamed. I learned how to clean and eviscerate fish (they cleaned what you caught in our house). All of this in days with the faint noises of water, the hum of insects and dabbed sunlight through willow and poplar trees.

Years later it made me sad to see that the Pataha was just a trickle and was clogged with weeds until it was almost gone in places. As the city experienced occasional flooding, the city built a concrete canal to channel the water so it doesn’t get into the flood plane. Ergo, no place where the fish can hide, eat and breed. The water is almost gone. I suppose people help themselves with watering. And people throw garbage in it. Once, while my middle sister Megan and I were walking around Pomeroy, we saw a television thrown in the water, right where Daddy and I had helped catch rainbow trout.

Jennifer McCabe Carrasco is an artist and teacher based in West Seattle. Her website is Carrasco Studio, https://carrascostudio.com/

Here Are 7 Great Books About Painting for Artists and Art Lovers – ARTnews.com